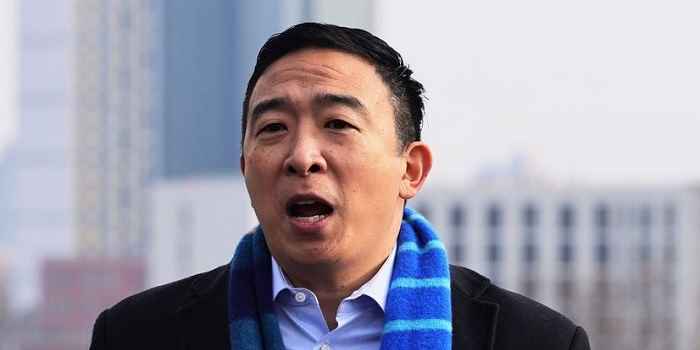 If you live in the US and are between the ages of 18 and 20, you’ve probably got a favorite politician.

And his name is probably Andrew Yang.

The former Democratic Presidential candidate was reviled by the establishment DNC media, dismissed by the rightwing media, and generally blacklisted during the 2020 campaign cycle.

Nevertheless, he was Google’s most searched politician this side of Donald J. Trump, and some of his ideas resonate with more than just his targeted constituency.

Of course, some of his other ideas are completely insane and fundamentally unworkable.

But at least the guy’s at least somewhat genuine.

And he had some really good merch.

I my very own self – I, who have never ever given a dime to a pol at any level ever (ever!) – made my very first political contribution to Yang just so I could score his Math. Money. Marijuana.™ olive drab t-shirt and matching beanie, with a Longer Than Long Shot™ shot glass thrown in – and later thrown back repeatedly – for good measure.

I am a gambler, after all.

(Disclaimer: I only made this “donation” after Yang formally withdrew from the 2020 Presidential race, knowing full well that he’d use my $30 – these items were deeply discounted! – on whatever political endeavor he had lined up next. Given that Yang is now running for mayor of New York City, I’m OK with that. An individualist free-market type will never govern in that state again, and Yang’s staying the hell out of mine. I may even buy another shirt from the guy.)

All this is to say that while Yang seems of the people – especially of the younger people – there was one market where he definitely split his constituents’ loyalties: casino gambling.

As the New York Post puts it in their very clever and not-at-all-cliched lede, “Andrew Yang is suddenly all in on casinos!”

(That’s kind of a poker pun more than a casino pun, but whatever.)

Previously, Yang was an outspoken critic of the gambling market, including both domestic brick-and-mortar casinos and mobile casino apps.

He viewed these as antagonists in a predatory marketplace designed to extract much-needed monies from those least able to afford said extraction.

Before continuing, please note that Yang supports a European-style value-added tax (VAT) on all US consumer goods.

Yang discusses his disdain for gambling in his concisely titled book “The War on Normal People: The Truth About America’s Disappearing Jobs and Why Universal Basic Income Is Our Future.”

“One thing that has surprised me is that many of these places — Baltimore, St. Louis, New Orleans, Detroit, Cleveland — have a casino smack dab in the middle of their downtown. …

“I’ve visited some of them on a weeknight and they are not encouraging places. Most of the people there do not seem like they should be gambling.”

Regardless, that was then. Like, a few months ago.

Today, it seems the Yangster has finally learned a thing or two about being a politician. The very first part of that transformation, of course, is to be as blatant a hypocrite as possible.

But this time, somehow, that blatant hypocrisy could finally be in the little guy’s favor.

That’s not the intent, of course, but it’s the upshot.

The intent, per Yang’s campaign manager Edwin Molina, is simply because the city needs it.

And the city comes first:

“No one policy is going to save us, which is why we need an all-of-the-above strategy to bring New York City back. That is why bidding on a New York City-based casino should happen before 2023. …

“Doing so would accelerate the return of jobs and tourism to our city, immediately injecting an estimated $1.5 billion in licensing fees and $900 million in new, annual tax revenue. Our City is unlike any other in the world, comparing New York to anywhere else is apples to oranges.”

Anyway, while there are plenty of casinos in New York (some of which are Class II tribal venues that even allow 18+ players to gamble on their premises), there’s only one gambling venue in NYC.

You see, the Resorts World New York City, located at the Aqueduct Racetrack complex in Queens (gross), doesn’t have much in the way of actual gambling.

There are no slots, there are no live dealer games, and there’s no real fun to be had.

Obviously, a proper casino in NYC would do pretty well.

And if Yang wins – which he’s favored to do at most 18+ online sports betting sites – maybe that’ll happen.

It would be one of those exceedingly rare moments in human history where a politician accidentally did a good thing.