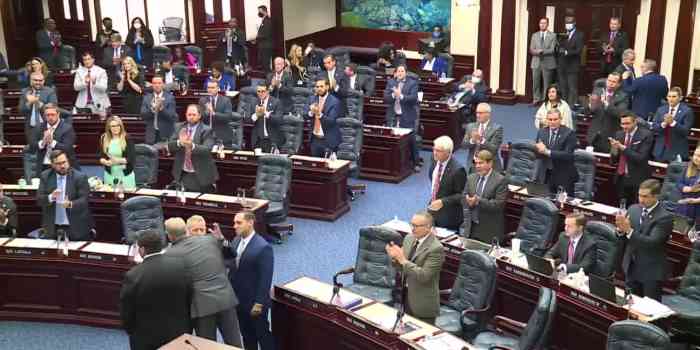 Late last month, we reported on the state of Florida’s shiny new gambling compact with the Seminole Tribe.

This compact, of course, replaces the defunct 2010 iteration (which the state violated) with a new 30-year deal, allowing the Seminole to build three new casinos on tribal land in addition to expanding their gambling rosters with roulette and craps.

Sports betting – to be administered by the Seminole at tribal venues and partner racetracks around the state – is also part of the deal.

The compact was approved overwhelmingly in the Florida House (97-17) and the Florida Senate (38-1).

Of course, many opponents of the new compact believe it constitutes unconstitutional gambling expansion, and legal challenges are expected.

While those challenges may have some legs, they may also be wildly misguided.

In Florida – as in all US states with legal gambling – casino gaming and sports betting are not so cut and dried when it comes to defining them under the “gambling” umbrella.

For example, in most cases, if a state has a constitutional amendment requiring voter approval for expanded gambling, the addition of new casino games to the approved “list” of gambling amusements is viewed as expansion.

In Florida, however, there is a gray area:

All casino gambling is conducted exclusively on sovereign tribal land.

Further, it is obvious per the Florida Statutes that roulette and craps – the two new gambling games in question – are not banned by state. (You can read all legal references to these games here.)

Thus, if roulette and craps aren’t explicitly illegal for casino vendors to operate, allowing said vendors to host such games is not gambling expansion.

The move doesn’t make an erstwhile illegal amusement legal. It simply clarifies that a non-regulated pastime will now be regulated.

Then there’s the issue of sports gambling.

Many anti-gambling advocates say that the introduction of FL sportsbooks is prima facie “gambling expansion.”

The Orland Sentinel is incorrect.

Do you see any references to sports betting in there?

In fact, sports betting – by multi-state precedence – is largely not even considered to be casino gambling at all.

Many states with tribal casino exclusivity laws have commercialized domestic sports betting precisely because – like fantasy sports or horse racing betting – it does not fit the standard historical definition of gambling.

Hopefully, the Florida-Seminole compact – which should generate $500 million in annual profit shares for the state – will prevail in the courts.

Still, you’re going to have to be 21 and up to play these new games and bet sports locally, so if you’re between 18 and 20 years old, you’ll want to check out the best 18+ online casinos for FL gamblers, instead.

And even if you’re over 21, these sites are still the only safe options for real-money online casino gambling and sports betting in Florida.