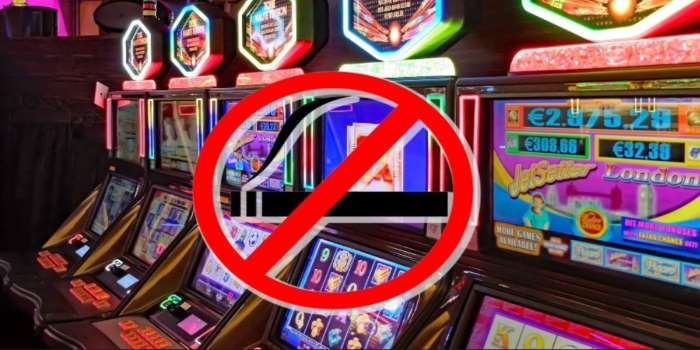 New Jersey casino patrons may have another reason to turn to mobile casino gambling.

For as long as most can remember, New Jersey had always allowed smoking sections in its casinos. According to state law, operators can designate up to 20% of any casino to smokers.

The prospect of casino smoking was an uncontested issue for many years, even after the anti-smoking revolution of the late 90s and early 2000s. However, the impact of COVID has brought restructuring for every corner of the industry. Especially the facet of smoking inside.

In July of 2020, the state enacted a 10-month ban on smoking inside casinos in an effort to slow the transmission of COVID-19. When the measure expired in April of 2021, many employees and visitors who had appreciated the anti-smoking rule pushed to bring it back.

Since then, there have been two attempts to amend New Jersey’s Smoke-Free Air Act. The first piece of legislation died at the end of the 2021 session, having received little discussion or traction.

However, the new gambling law is drawing heavy consideration from lawmakers on both sides of the political spectrum. Republican Senator Michael Testa has backed the bill with complete support.

“I’m co-sponsoring S264 to eliminate the casino smoking loophole. We can both protect the health of casino workers and their guests while safeguarding our state’s thriving gaming industry.”

Advocates for the bill claim that the casino loophole included in the Smoke-Free Air Act forces casino workers to forgo their rights to a “safe and healthy” work environment.

Still, the smoking ban could stand to hurt the state’s casinos in a drastic way. When New Jersey welcomed online casino gambling to its list of services, the state gouged an already-bleeding retail industry.

And despite early reopenings in 2020, New Jersey casinos have proven unsuccessful in reviving pre-COVID revenues.

The Casino Association of New Jersey quickly responded to the prospect of an anti-smoking bill, affirming that smokers make up a significant portion of casino clientele. The group’s president said the following:

“Banning smoking completely and permanently would have long-term financial implications for the industry and the region, placing Atlantic City casinos at a competitive disadvantage with Pennsylvania casinos where smoking is permitted.”

Lupo added that workers would also be taking a hit if the bill were to pass. Many, if not most, casino employees rely on tips and turnover to supplement meager hourly wages.

A cut to the customer base would translate to a direct decrease in weekly earnings for employees. Other consequences could vary from mass layoffs to casino shutdowns.

S264 is currently in committee with the Senate. At this point, the matter is not of priority to the state. Still, the bill has nearly a year to find its way into law and very well could.