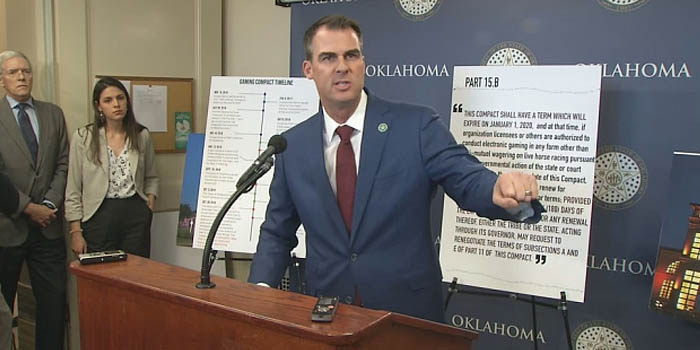 Oklahoma is one of the few states in the US that allows 18+ gambling in certain casinos. Most of these casinos are tribal, but as an ongoing dispute between the governor and Native Americans wages on, the Sooner State could open its casinos up to commercial operators.

The main issue stems from Gov. Kevin Stitt’s belief that the 15-year compacts between the state and tribal casinos expire on January 1, 2020. The tribes, on the other hand, believe that the current compacts will automatically renew unless mutually agreed to renegotiate.

The compacts in place state that Oklahoma’s Native American tribes have the sole right to operate casinos with Class II and Class III games in exchange for exclusivity fees ranging from 4% up to 10%.

However, Stitt claims that Class III gaming– slot machines, roulette, and craps– will be illegal after January 1. Since the tribes insist that the compacts automatically renew, they plan to continue offering Class III games after the first of the year.

The showdown between the two parties may not be completely disastrous for 18 and over gamblers in the state. Stitt has admitted to discussions with commercial casino operators.

“Let’s open it to everybody then,” Stitt said this year. “What is operating a casino worth to have [an] exclusive right to do that?” Stitt also claimed that commercial operators would sign a deal immediately if given the chance, even offering to pay the State of Oklahoma 18% in taxes.

Stitt is not opposed to renewing with the tribes, but he would like the casinos to pay more in exclusivity rights to equal the market rate that the commercial operators are willing to pay.

“We want to get a market rate, and then let’s have certainty 15 years from now so Oklahoma doesn’t go through this again,” the governor said. There is also the possibility that Stitt will offer the tribes the right to host sports betting in exchange for higher exclusivity fees.

Right now, the exclusivity rights paid by the tribes equated to $148 million in the 2019 fiscal year. Overall, Oklahoma’s 141 casinos have a total economic impact of $9.8 billion and account for 76,000 jobs in the state.

For the 2016-17 budget year, Class III gaming at tribal casinos was responsible for $2.2 billion in revenue.